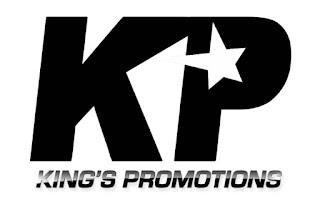 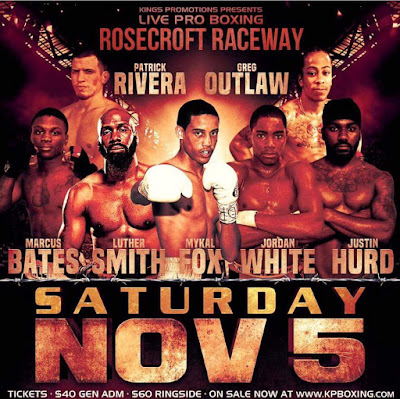 Posted by Juan Marshall at 5:42 AM No comments:

Kings Promotions Card Is A Go!

Kings Promotions is presenting another card in the Beltway Boxing area better known as the DMV. Now they can say they've given more young fighters a chance to fight in front of their hometown fans of Washington DC, Maryland and Virginia. On Saturday night, November 5th Marshall Kauffman returns back to the Rosecroft Raceway in Fort Washington, Maryland. On this card Kings Promotions fighter Myke "Professor" Fox will showcase his technical talent once again as the main event.

The Complete bout sheet is below. 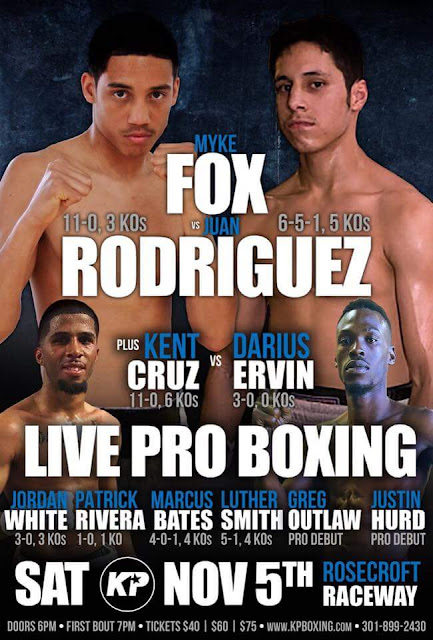 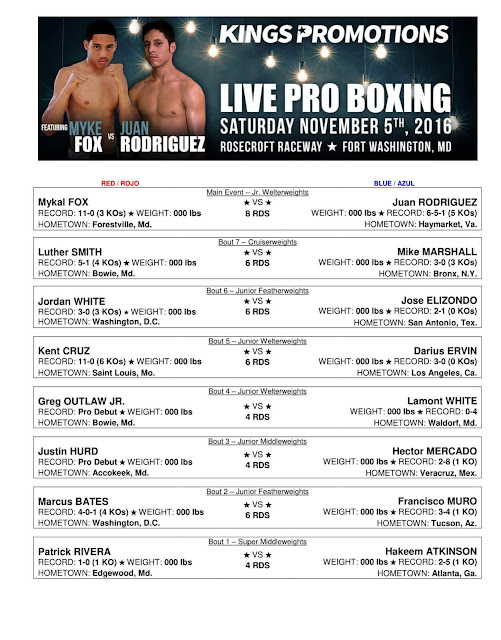 Posted by Juan Marshall at 11:16 AM No comments:

Reeves Set To Battle For IBO Title On November 12th In Baltimore! 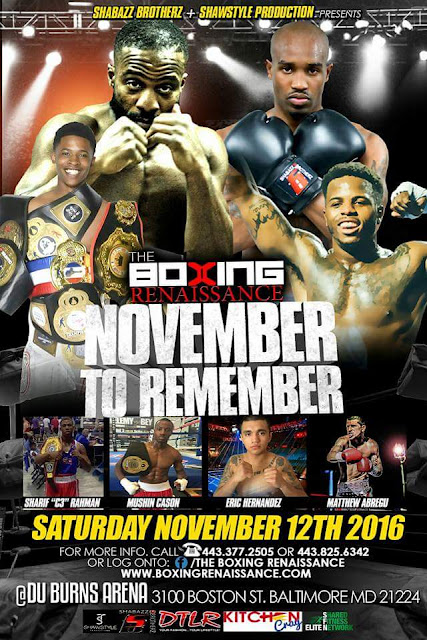 Shawstyle Productions and Shabazz Brotherz return to Baltimore for the much awaited and imminent 6th installment of the Baltimore Boxing Renaissance with a November To Remember. Following countless unprecedented standing room only and completely sold out shows; the Baltimore Boxing Renaissance (BBR6) is back like never before and this time at the Coppermine Du Burns Arena on November 12, 2016.

Returning to the ring is Baltimore boxer Travis "Seveer" Reeves who is currently the Maryland State Cruiserweight Champion. Reeves will battle for the IBO Light Heavy Weight Championship on November 12. Also returning to the ring is Jeffery “Gladiator” McCalla and Kwame "Rambo Time" Ritter with a KO victory under his belt. Stephon "The Surgeon" Morris, will continue his impressive career, squaring off in the "Keys to the City" card against Devin Butcher deeming BBR6 another history maker.

Sharif Rahman, son of BBR6 Host and former Lineal, WBC, IBO, and IBF heavyweight champion Hasim Rahman, will be returning to the ring after an impressive KO during his professional debut at BBR4. Mushin Cason, younger brother of Hasim Rahman, will also step into the ring.

Among the crowd will be WBC Featherweight Champion Gary Russell Jr., other special invited guests to include Public Figures, Professional Athletes, Dignitaries, and a host of dedicated fans.

The main event fighters and their corners will be on hand for Q&A. The Weigh-In will be held on Friday November 11 at Game Sports Bar and Grill, 1400 Warner Street, Baltimore, MD also at 6PM. Fighters will tip the scale before they face off at the Baltimore Boxing Renaissance. The 6th installment of the Baltimore Boxing Renaissance (VI) is set to take place at the Coppermine Du Burns Arena, located at 3100 Boston Street in Baltimore, MD Saturday November 12, 2016 from 5PM – 11:30PM EST.

General Admission and VIP seating options available. VIP tickets include: Exclusive Table Seating and Private Entrance, VIP Lounge Area with a Private Bar and Hors d'oeuvres and official HD Live Broadcasting of the entire fight streaming throughout the night.
Posted by Juan Marshall at 9:35 AM No comments: